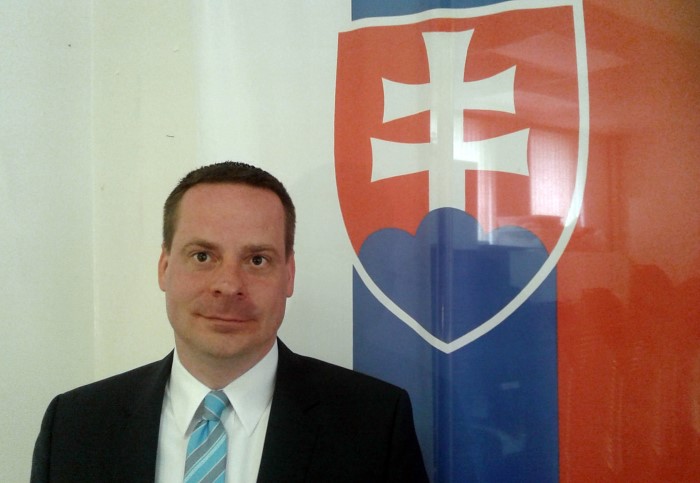 Canadian Slovak: Welcome to Calgary, Mr. Ambassador, at the Consular Days. This is the third time you came to Western Canada, is there still interest in Consular Days?

Andrej Droba: I am pleased that the interest in our consular services is still great. This proves that these consular visits are necessary and valuable for our compatriots. We notice interest from Slovaks not only here in Calgary, but also in Vancouver, where we will be even busier. We are thinking to hold a consular day in Edmonton next year, where there is also a large Slovak community, including many young people and families, and we would like to see them.

KS: What is the embassy in Ottawa planning, which events will take place in the remainder of the year?

AD: We will organize several cultural events. Pavol Hammel will visit the Embassy on June 4, we will have an informal friendly meeting, and he will sing several songs. I am delighted that in cooperation with the city of Ottawa and Mayor Jim Watson, a unique artwork Quilt of Belonging, created by Esther Bryan, an active member of the Slovak community will be displayed at the Ottawa City Hall. The biggest event this year will be the Slovak Day on October 1st, 2017. It is a project under the auspices of Ottawa as part of the Ottawa Welcomes the World event and is part of the 150th anniversary celebration of Canada. The city of Ottawa has offered to embassies here a large representative exhibition space. Ottawa is keen to see the various embassies and countries and the communities they represent to have an opportunity to present themselves to the wider Canadian public. Some 40 embassies participated in the project. The first of them have organized their national days, and the rest will be held throughout the year. Our big Slovak event will be on Sunday, October 1st. Within this day, we plan to introduce Slovak culture and traditions, Slovak gastronomy, we want to show Slovakia in the whole spectrum of skills, knowledge, richness of culture and history, present opportunities in tourism, we will present young Canadians with possibilities of studying at Slovak universities, we will have some nice cultural events, performances of Slovak folk ensembles in combination with expatriate folk ensembles from Canada, a famous Slovak chef will introduce traditional Slovak dishes to the Canadian audience, we are preparing a fashion show, then a sport presentation in which Slovak hockey players will be involved, we really want during that one day to show to the audience and the public in Ottawa and surrounding areas Slovakia and the Slovak-Canadian story, to present the best and most beautiful Slovakia has to offer.

KS: Let’s hope that the readers of The Canadian Slovak who live in Ottawa, Montreal, Toronto and elsewhere will come and support this event.

AD: Everyone is warmly welcomed, we will promote this event, have mailing campaign, send invitations, and we will look forward to welcome all our compatriots, Slovaks and Canadians. It is easy to estimate that during one day, the Slovak exposition will be visited by several thousand people, estimates range between five and nine thousand people.

KS: Mr. Ambassador, is there a chance that President Kiska or Prime Minister Fico will visit Canada?

AD: We are preparing several visits by our constitutional and high-ranking officials, if we could, we would like to organize a visit by the Minister of Foreign Affairs and European Affairs Miroslav Lajčák this year in Canada, and we have already conveyed to Canadian representatives the interest of President Kiska to visit Canada next year, sometimes in the spring. The year 2018 represents a deep symbolism in Slovak-Canadian relations and the history of Slovakia as such. We will celebrate the 25th anniversary of the Slovak Republic and also the 25th anniversary of the establishment of diplomatic relations between the Slovak Republic and Canada, hence such visit would really fit within the context of these important anniversaries.

KS: Well, we hope that we will be able to welcome Slovak leading officials in communities all over Canada, including in Western Canada. Recently, the Free Trade Agreement between Canada and the European Union, including Slovakia, has finally been signed. Has the Slovak Republic already ratified this agreement and when can we expect to really simplify and increase trade, services and other relations between Slovakia and Canada?

AD: The CETA agreement was approved in October and signed in Brussels by Prime Minister Trudeau for Canada and Prime Minister Robert Fico for the European Union as then President of the Council of the European Union. The agreement was formally agreed by the European Parliament in mid-February. Preparations for the provisional application of this Agreement are currently taking place. Canada must change some of its laws before the agreement can be applied and then run the ratification process. The agreement or the relevant law that will implement the agreement is currently reviewed by the Senate of Canada, it is expected that this legislative process could be concluded within Canada in two or three weeks. Consequently, it will be necessary to agree between Canada and the European Union on the date on which the agreement can enter into force provisionally, meaning that the agreement will be de facto implemented even if it is not yet ratified because the ratification process by the EU countries will take place in every national parliament, in some countries even provincial parliaments have to state their position so that the ratification process by the European Union countries will last for several years. However, this does not prevent the agreement from being applied in advance. It is expected that at the agreed date, the date on which the agreement will begin to apply provisionally, about 95 percent of all its provisions will be applicable. This means that entrepreneurs, businesses and companies in both European Union and Canada will have an absolutely simplified process for European companies to access market in Canada and Canadian companies to access markets in the European Union. This agreement basically removes 99 percent of all tariffs, duties and other financial barriers to free trade. These bring huge opportunities.

KS: The deal is very welcome and we are already looking forward to Slovak products being sold in regular Canadian stores and supermarkets as they are well-known for their quality and many are very unique. Is there anything that you want to tell readers of The Canadian Slovak?

AD: I really want to thank for always very nice and warm welcome wherever I travel, I very much like meeting our compatriots not only in Eastern Canada and its big cities, but I very much like traveling to the Slovaks in all parts of Canada. I also want to thank them for all the work and everything they do in Slovak-Canadian relations and what you do in favor of maintaining Slovak culture, Slovak identity, and Slovak awareness. I very much appreciate the opening of new Slovak schools in Canada. Yesterday, I had a meeting with Mrs. Nina Paulovicova who is finalizing to open a school in Edmonton, the Slovak school in Calgary is up and running, another school will open in Montreal, those are things that make me very happy. In addition to the thanks, I would like to wish the readers of The Canadian Slovak good health, good luck, and I look forward to further meetings.

KS: Thank you very much for the interview.