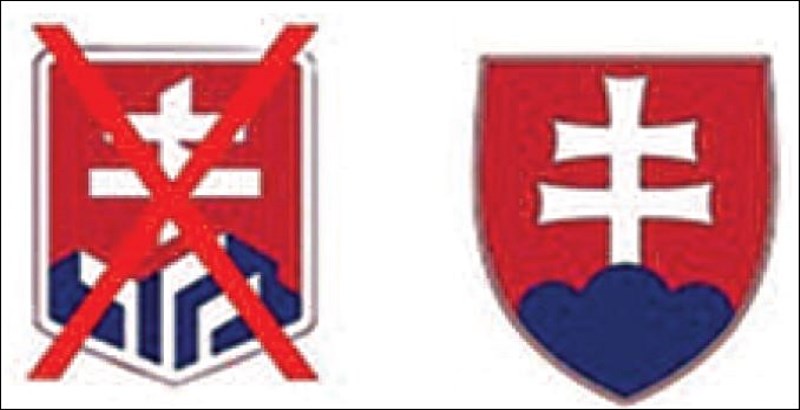 After the new jerseys of the Slovak National Hockey team were unveiled earlier this year, it provoked numerous critical responses in Slovakia and abroad. Prof. Ľudo Zanzotto, the retired Consul General of the Slovak Republic in Calgary wrote his opinion to the President of the Slovak Republic and several Ministries of the Slovak government. His letter (in Slovak) was published on Page 7 of Kanadský Slovák Issue No. 20 (you can download it here). In KS Issue No. 21, Mr. Ján Uher from Toronto wanted to know whether Prof. Zanzotto received a response (see page 5, you can download Issue 21 here). Government responses are also shown below (in Slovak): Here and Here. You will find the downloaded documents in the forder on your computer which you normally use to download things.

Dear Editor of The Canadian Slovak,

In the article "On remodelled Slovak hockey emblem", published in Issue 21 (Nov. 3, 2018) of your newspaper, the author, Mr. Ján Uher, urged me to share the replies on my letter to the government officials of the Slovak Republic regarding the new coat of arms for Slovak hockey representatives. That's what I will do.

The response goes on to explain that the Slovak Ice Hockey Association (SZHH) will continue to receive financial support from the Ministry of Education because it did not break the contract. I actually did not even ask about the funding.

The other part of the answer is most interesting as it talks about the meeting of representatives of SZLH with the Minister of Education Martina Lubyová, which ended with an agreement. I quote: "Upon agreement of both parties there will be additions to jerseys of the Slovak ice hockey team as follows - the jerseys will be marked Slovakia or Slovensko and the national emblem will be placed on the sleeve of the jerseys. At the same time, the SZHH logo, which is reminiscent of the State emblem, will be accompanied with the inscription "Hockey Slovakia" to make it clear that it is not a state emblem. " End of the quote.

Who  says that one can not agree on everything: Slovak hockey players will have a stick on their breasts with a pruned cross, reminiscent of a shameful state emblem {from the Communist past- remark by the Translator}, and the situation will be rescued by the proper emblem placed on the sleeve. And then that something is impossible. The pocket on the sleeve will rescue the honor and the integrity of the state symbols of the Slovak Republic.

Respect of Law on the Protection of State Symbols (Act No. 63/1993), Criminal Law of Defamation of the Nation? Please!

A group of MPs (A.  Hrnko, J.Paška, S. Zelník, T. Jančula, D. Tittel) filed a proposal for tightening and supplementing Act No. 63/1993. One part of the proposed amendment is the addition of Section 3, paragraph 3, with the following sentences:
"The sporting representation of the Slovak Republic uses the state emblem in significant competition, especially in the manner provided for by this Act on sportswear. Other graphic elements of sportswear, with the exception of the starting number, shall not be preceded by a representation of the national emblem ".

Thanks to them all. Just hope it's not too late. Yes, it's always money, somebody gets a monopoly on selling shirts and other paraffins to a hockey fan. But is that everything?

Many years ago, shortly after the accession of the Slovak Republic to the European Union, in my interview one diplomat said that he did not expect the patriarchal Double Cross to remain as the Slovak state emblem for more than ten to twenty years. It was years before the wholly open attack of "liberals" on all the cultural values ​​and traditions of the European peoples, and indeed on the peoples of the European Union itself. And actually to Western Christian civilization around the world.

The words of my friend diplomats were prophetic ...