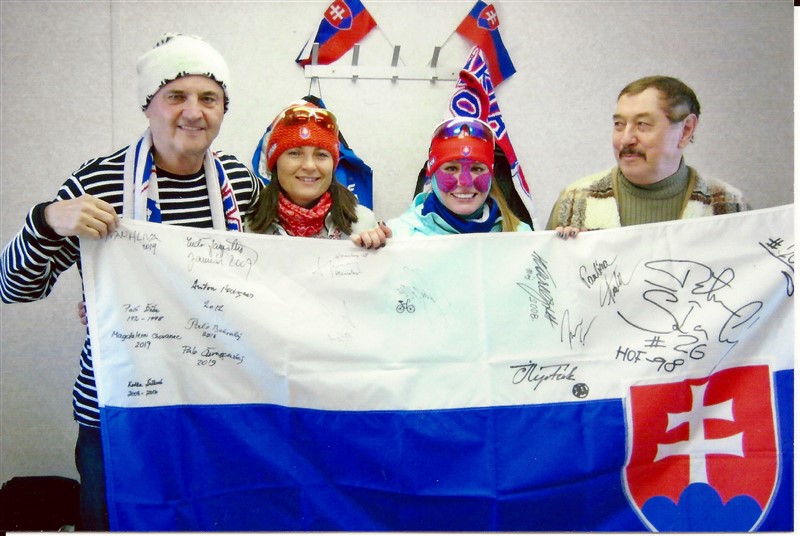 Biathlon World Championship was held in February at the Nordic Centre in Canmore, Alberta. Representing Slovakia were the Olympic winner Anastázia Kuzminová, Paulina Fialková, Matej Kazar, Martin Otčenáš, Tomáš Hasilla and Michal Šima. Because of the record-breaking freezing temperatures, eventually the organizers had to cancel or shorten the distance of most races, thus the World championship was a disappointment not only for the athletes but also for the spectators.

Slovaks from Calgary already welcomed Slovakia's biathlonists as they arrived at the Calgary Airport, which was also noted by the media in Slovakia. When we came to cheer them directly at the race, the competition was canceled, and we could meet the Slovak team only at their hotel. It was a nice meeting and a personal honor to greet the top Slovak biathlonists. Nasťa Kuzmina won three olympic Gold medals for Slovakia, including the first-ever gold for independent Slovakia at the Vancouver Olympics in 2010.

Anastázia Kuzninová and Paulina Fialková also signed the honorary flag of the Slovak Republic, which the Branch 65 of the Canadian Slovak League in Calgary maintains for the signatures of prominent Slovaks who visit our city. Among them are the signatures of the Šťastný brothers and Peter Sagan.

The sad news is that Anastázia Kuzminová will end her race career in March of this year at the championship in Östersund, Sweden. The 34-year-old Anastasia will end her extraordinarily successful sporting career so she can devote more time to her family, especially her 11-year-old son Jelisej and 3-year-old daughter Olivia. But she plans to train a new generation of Slovak biathlonists, whom we can welcome on the World Cup in Canmore for many years in the future.

In the photos: With the flag: the author, coach Anna Murínová, Paulína Fialková and member of the CSL Fero Kilo, in others Anastázia Kuzminová with the author, and with Fero Kilo.