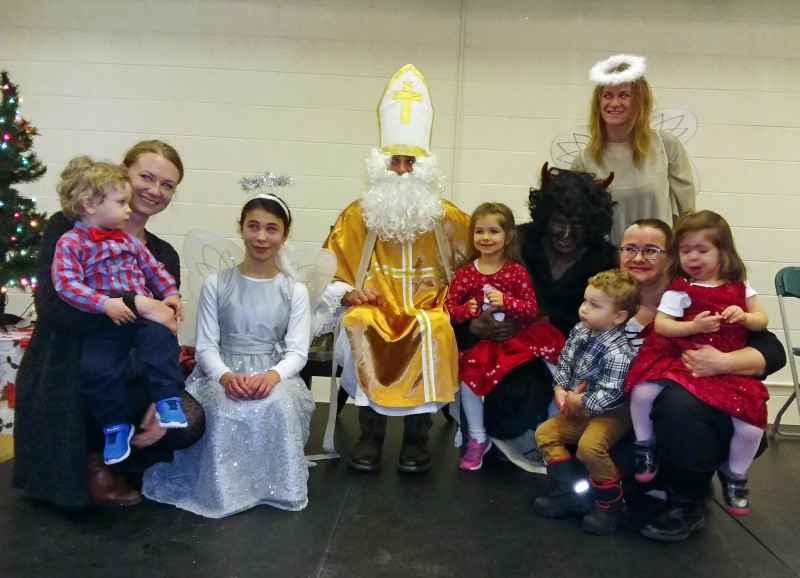 On Sunday, December 8, after travelling all over the world, St. Nicholas finally arrived in Calgary. He was eagerly awaited. A record-breaking 92 children signed up and St. Nicholas had a gift for each of them. The devil put only two kids in the sack, but it was really a misunderstanding as they too were good all year round, and only threw a tantrum once or twice, so they also received a gift.

The crowded Montgomery Community Association hall also held a Christmas Market where more than 400 visitors could buy traditional Slovak Christmas decorations, wafers, dumplings, desserts, or even books. Only the cabbage soup sold out even before the arrival of St. Nicholas, and a large pot quickly emptied. At least there was enough brewed wine.

Until the arrival of the St. Nicholas Day, the Jana and Danny duo sang Slovak and Czech carols and other popular Christmas songs. As always, they were excellent.

Then all the children could talk to St. Nicholas, two angels and even the devil asked them few questions, but even he had to admit that the Slovak children are great, good, love their parents, siblings and friends, and even school, mostly.

We thank the Slovak School and the Slovak Library for organizing this event and especially the volunteers: Renata and Jan Jelínek, Eva Hadzima and Maroš Pazej, Zorka and Ivan Ryban, Miki Somos and more than 30 other volunteers who always help to keep the Slovak community active and attractive for our children and youth to keep together.