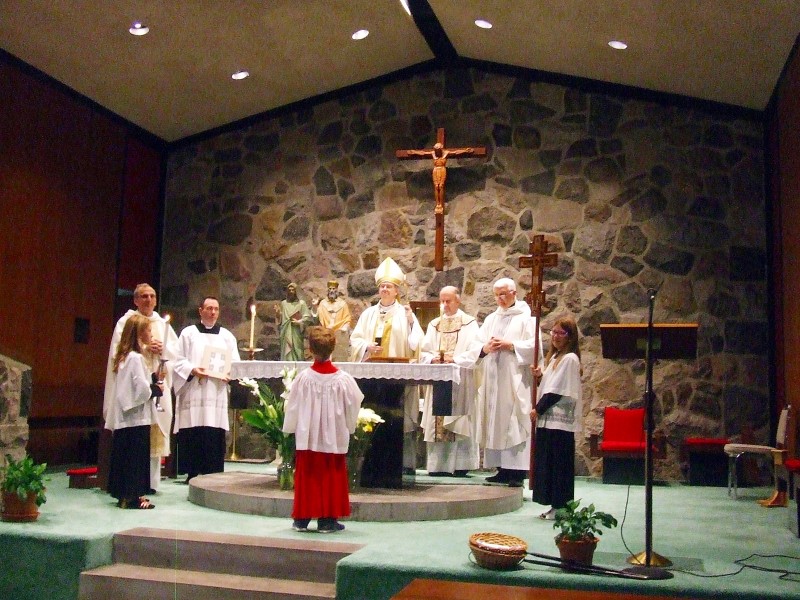 Slovak Catholic community in Montreal celebrates the 9oth Anniversary of founding of the Sts. Cyril and Method Parish. Cruel poverty in their homeland and destruction caused by World War I caused many to leave Slovakia and head for North America. With only a small bag of personal belongings, they also brought with them something more important - a great and strong Christian faith. They worked hard every day and saved cent by cent from their miserable wages, hoping that one day they would be able to built a church where they could thank the good Lord for the daily mercies. In 1928 they founded the Slovak Parish of Sts. Cyril and Method in Montreal. They could finally get their own Church owned by the Parish in 1944.  Years passed, generations have changed and left us a legacy for which we are very grateful.

The 90. Anniversary Mass and Banquet were held on September 23rd in the Sts. Cyril and Method Church on Jean-Talon Street. Celebrated by the Most Reverend Christian Lépine, Archbishop of Montreal, and concelebrated by Rev. Gabriel Juruš, Parish priest,  Monsignor Pierre Blanchard, Episcopal Vicar to the Cultoral and Ritual Communities of the Archdioces of Montreal, and Frier Jozef Blaszak, Custos of Canada of the Franciscan Order. Archbishop Lépine delivered a powerful and inspiring homily on how faith can keep communities, families and individuals strong and enduring.

The Anniversary Banquet continued with the celebration of one of the oldest and still vibrant Slovak Parishes on North America. Archbishop Lépine blessed the delicious meal, and Vlad Cincik, President of Branch 2 of the Canadian Slovak League welcomed all guests. Vojto Mirga reminiscent on the history of the Parish, and Theatre group Priadky, led by Bea Janurova, presented a wonderful program of spiritual songs, historical sketches, and famous quotations befitting the occasion.

All Canadian Slovaks congratulate and are proud of the Montreal Slovak community and their leaders for maintaining our heritage, traditions and faith, thus fulfilling the dreams of our ancestors who came to Montreal and Canada with next to nothing and built us such a strong legacy which we are proud to maintain.