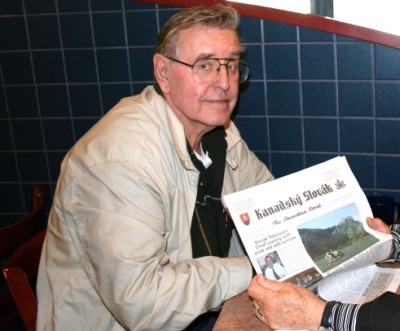 Robert Reguly passed away on Thursday February 24, 2011 at his home in Toronto. He was born on Jan 19, 1931. He is survived by his wife of 56 years Ada, son Eric and wife Karen, daughters Susan and Rebecca and grandchildren Adrianna, Emma and Genevieve. Bob was a respected Journalist, dedicated family man and a proud Slovak Canadian who will be greatly missed.

Born and raised in Fort William (now Thunder Bay )  Ontario to Slovak Parents from the Orava Region of Slovakia, Bob worked as a logger, licensed timber scaler and parachuting Saskatchewan Smokejumper before turning to journalism. After his first jobs in journalism, he moved to the Sudbury Star in Sudbury to be closer to where Ada, his girlfriend and future wife, lived. At 24 Bob married Ada fifty six years ago.

Bob had a distinguished career in Canadian Journalism, working for many major Canadian newspapers and winning numerous awards. A graduate of the University of Western Ontario, he began as a reporter and editor on newspapers in Timmins, Sudbury, Winnipeg, and Vancouver before taking on the role of investigative journalist in Toronto.  At The Toronto Star he won three  National Newspaper Awards - for exclusive stories about Gerda Munsinger and Hal Banks - and for a series on the race relations in post-riot U.S. Cities.

Bob’s remarkable journalism career spanned many significant events including reporting from Vietnam, the assasination of Bobby Kennedy, the Apollo 11 space mission and  the 1971 war between India and Pakistan. In addition, Bob was one of the final journalists to interview former Prime Minister John Diefenbaker shortly  before his death. John Diefenbaker trusted Bob and requested the interview. Overall, Bob reported from over 31 countries and four wars.  He was also the Toronto Star’s Washington and Ottawa Bureau Chief.

Bob’s impact on Canadian journalism extends beyond his writing, as Peter Gzowski got his start in journalism by serving his apprenticeship as a journalist under Bob at the Timmins Press and his son Eric is a noted journalist with the Globe and Mail.

He turned to the communications field and started free-lance work for newspapers and magazines. This included a role as acting Communications Director with the provincial government at the Ministry of Health and then at the Ministry of Environment. He later served as President of the Outdoor Writers of Canada where in 2001 he was nominated for a Canadian National Magazine award for an article in Outdoor Canada magazine.

I first met Bob at a Slovak Businessmen’s meeting about twenty years ago where I first learned that he was Slovak and of his pride in his Slovak heritage. We have since worked together on many Slovak Canadian committees and became very good friends. The Kanadsky  Slovak has been blessed with  Bob  Reguly’s writing on many occasions. He was a regular contributor to Kanadsky Slovak  giving his time generously.  His writing included interviews with The President of the Slovak Republic Rudolf Schuster, Builder Dushan Miklas, rancher Peter Butala, Artists (Steve Galvanek, Alois and Marta Brestovansky, and Pauline Holancin ) and many significant events in the Slovak Canadian community.

He will be greatly missed.