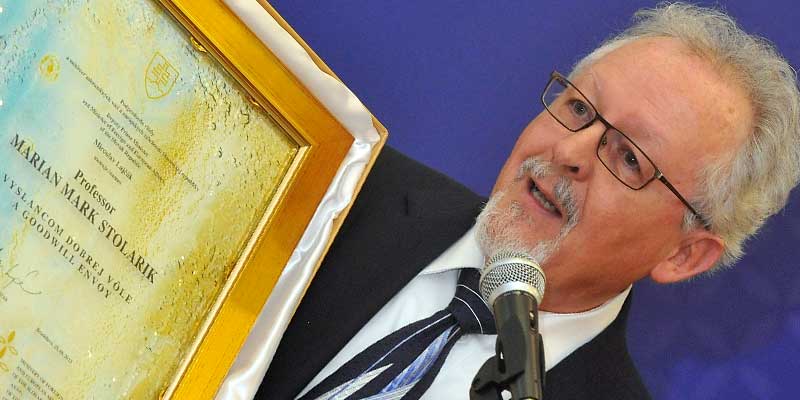 It is my great honour to announce that M. Mark Stolarik was appointed to the position of President on the Canadian Slovak League (CSL) by the Board of Directors, and his term will begin on October 1, 2016. Previously, he served as CSL President from 1993 to 1999, and currently he is the President in CSL Branch 63 (Ottawa) and a Professor and Chairholder in Slovak History and Culture at the University of Ottawa.

Marián (Mark) Stolarik was born in the picturesque central Slovak town of Turčiansky Sv. Martin to Imrich and Margita Stolárik. As the Russian front approached in the winter of 1945, Mark's parents decided to evacuate their family of six children into Austria with hundreds of other Slovaks, to escape the fighting and possible retribution by Communists who were persecuting supporters of the first Slovak Republic (1939-1945). The refugees then languished in one room in Austria until 1950. In 1951 they made it into Canada, first settling in Hull, Quebec and later in Ottawa, where Mark grew up and graduated from the University of Ottawa with honours in history (1965) and with an M.A. in history (1967). He subsequently published his M.A. thesis on "The Role of American Slovaks in the Creation of Czecho-Slovakia, 1914- 1918," in the annual Slovak Studies, No. 8, 1968.

After graduating from the University of Ottawa, Mark decided to enroll in the Ph.D. programme at the University of Minnesota. Here in 1963 his professor Timothy L. Smith had established the first Immigrant Archives in the USA. Mark helped Smith collect archival materials from Slovak communities in the USA and Canada while working on his dissertation, "Immigration and Urbanization: The Slovak Experience, 1870-1918" (Ph.D., 1974). The dissertation was published by AMS Press in New York with the same title in 1989.

Mark Stolarik's professional career began as a Lecturer in History at the Cleveland State University (1972-1974) and as an Assistant Professor (1974- 1976) at the same university. In 1976 he decided to return to Canada, to work for the National Museum of Man (later the Canadian Museum of Civilization). During this period he visited many Slovak communities in Quebec and Ontario, collected numerous material artifacts pertaining to Slovak history and culture and deposited them into the collections of the Museum, the National Library and the National Archives. He also interviewed on tape such Slovak pioneers as Ján Frajkor, Štefan Hreha, Štefan Jesenák, Hermina Kráľovicová Andrej Potocký, Michal Sinčák, Jozef Tokár and others. In 1977, while at the National Museum of Man, Mark also established the Slovak Studies Association, which attracts scholars in the USA and Canada into one organization that sponsors scholarly presentations at the American Association for the Advancement of Slavic Studies. The SSA also issues an occasional Newsletter informing its members of their activities. Stolarik served as the Secretary-Treasurer and Newsletter editor for the first ten years of this organization, which still exists.

In 1979 Mark returned to the United States to become Executive Director (later President) of the Balch Institute for Ethnic Studies in Philadelphia. It was a library, museum and education centre dedicated to collecting, displaying and interpreting material artifacts, library and archival collections on all of America's ethnic groups. While there he established three departments, increased the staff from seven to twenty-five and recruited fifty volunteers. During his thirteen years as head of the Institute, Stolarik raised millions of dollars from various individuals, corporations and foundations in order to fund the Institute's operations, exhibits and programs. The Trustees of the Institute were so satisfied with his work that they told him that he could stay on until he decided to retire. While in Philadelphia Stolarik also joined the Slovak community and he and his family became active members of the Slovak parish of St. Agnes-St. John.

Meanwhile, in the 1980's the Slovak community in Canada and the USA raised $500,000, which the Canadian government matched with another $400,000 in order to establish a Chair in Slovak History and Culture at the University of Ottawa. The Chair was formally inaugurated in the History Department in May of 1990. After a competition for the position of Chairholder was announced, Mark Stolarik was among those who applied and he won the competition. In January of 1992 Stolarik began his career as Professor and Chairholder of the Chair in Slovak History and Culture at the University of Ottawa. Since then he has regularly taught courses on the history of the Slovaks, on Central European history and on the history of Immigration to North America. In addition, he has established a Slovak Archives at the University with collections from prominent personalities in the USA and Canada. With additional funds raised in the last twenty years, Stolarik has established eight scholarship funds at the University, to promote the study of Slovak history, to allow outside scholars to do research in the Slovak Archives, and to invite guest speakers to address matters of interest to scholarly and local Slovak community. He also organized three major international conferences at the University, one of which (in 2002) was attended by the President of the Slovak Republic. The papers of all three conferences either have been or will be published in the near future. Altogether Stolarik has published nine books and over sixty articles in scholarly journals pertaining to Slovak or immigrant history. His most recent publication is: Where is my Home? Slovak Immigration to North America, 1870-2010 (Bern: Peter Lang, 2012).

In addition to his professional interests, Stolarik continues to actively participate in North American Slovak communities. Besides being a member of the First Catholic Slovak Union, the National Slovak Society and the Slovak Catholic Sokol, Stolarik has been a member of the Canadian Slovak League since 1958. In 1993 he was elected National President and served for two terms. In 1997 he was elected President of Branch 63 in Ottawa, a position which he still holds. On October 1st, 2016 Mark Stolarik once again becomes the National President of the Canadian Slovak League.

Mark Stolarik is married to the former Anne Ivančo of Oshawa and has two sons: Andrej and Matthew.