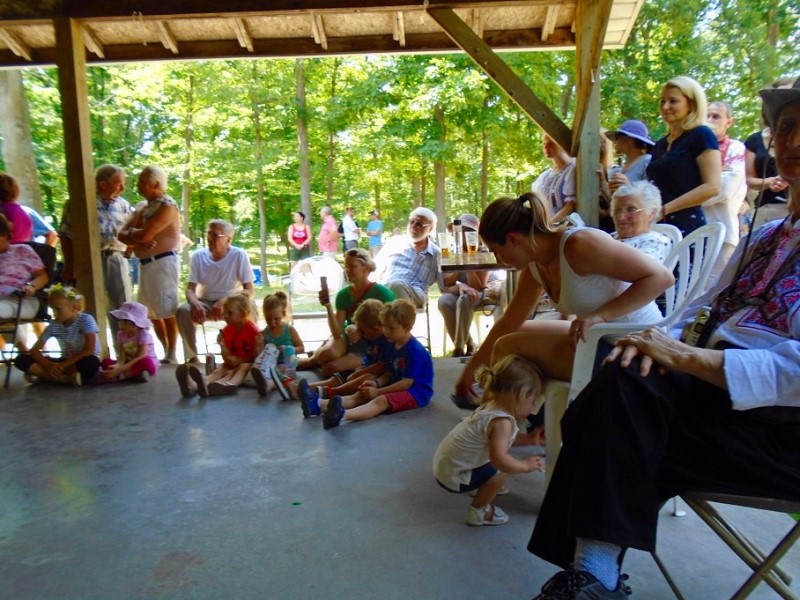 On Sunday, July 15th, 2018 the First District Assembly of the Canadian Slovak League hosted the 80th Annual Slovak Day in Karlovac Park, Milton, Ontario. Despite the extreme heat, hundreds of Slovaks from the Toronto region met, attended a Greek Catholic Mass, ate many Slovak delicacies and enjoyed the music of Miro Letko and the performances of the Toronto “Východna” dancers. Three groups from “Východna” performed: the juniors, intermediate and seniors. They did an excellent job and are to be congratulated. Andrej Stolarik played the “fujara” and sang “Išiel furman dolinou…”

His Excellency Andrej Droba, Ambassador of the Slovak Republic, attended and gave a rousing speech, and bade farewell to those present, since his four-year term as ambassador will come to an end on July 31st. Mark Stolarik, President of the Canadian Slovak League also spoke. He encouraged those present to join the League and to subscribe to Kanadský Slovák, the last surviving Slovak newspaper in Canada. He warned that, without our Canadian Slovak League and our newspaper, we will disappear as an ethnic group in Canada.

Congratulations to Emily Bohunicky and her team in the First District Assembly for having organized this very successful Slovak Day.

May we meet and enjoy many more!